A quick catchup, a granny stripe blanket and the show...

About time I did a blog post! I didn't realise how long it had been...things have been so busy here lately! Ok...so I'll try and keep it brief and give you a little catchup on what we've been up to lately...

The boys had their end of term "Glow in the Dark" disco at school. They were super keen to get there...we lined up for ages to get in! So many people turned up which was awesome for fundraising! We finally got in... headed straight to the glowstick stand to stock up on flashing, glowing stuff....then about 20 mins later the boys declared it "super boring" since all there was to do was dance! LOL So...after all that we ended up heading home early waving our glowsticks all the way.

Ayden and Riley got their mid year school reports and I have to say Paul and I are very proud of both of them! They're both doing such a great job...and they're enjoying school too which is fantastic.

Paul has been REALLY busy with work...but now has a couple of weeks off...and boy does he need it! I hope he can take time out and recharge his batteries.

Madi is thoroughly enjoying having the boys home to play with now that the school holidays are here! (She's going to miss them terribly when they go back to school again.)

I've started a new blanket for Ayden this week. I've been trying to decide what type of blanket to make but when I saw Melissa's blogpost about her granny stripe blanket HERE I was good to go! Ayden chose the colours and I've only done a few rows so far...but it'll grow! It's a lot wider that what the pic shows...and I'm going to add those two greens in next... 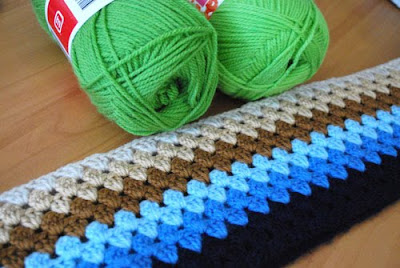 The tutorial for the Granny Stripe blanket that I used can be found HERE.
On the weekend we took the kids to our local show. They had SO much fun! We saw lots of animals, bought showbags, saw a puppet show, had some rides, but my absolutely favourite part was the REAL fairy floss on a stick! You know the kind that's spun right in front of you...so YUM! Not like that stuff you get in the bag. I haven't had real fairy floss like that since I was little...so fun! I snapped a few pics...they're not the greatest since I only took my point-&-shoot camera but at least I got some! 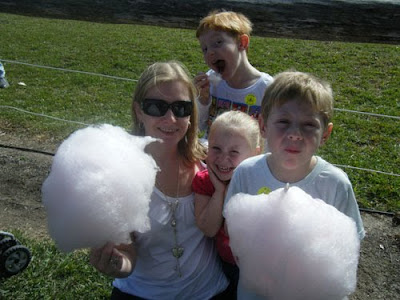 Big excitement when we saw the showbag stands! LOL 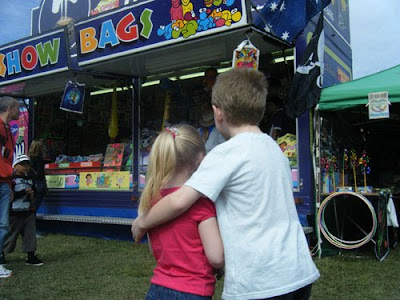 We found the big poster that all the Prep classes created together at school to enter into the show competition....and it had won first place! Riley was very excited! The poster is their version of the show...Riley worked on the fireworks up in the top right corner. 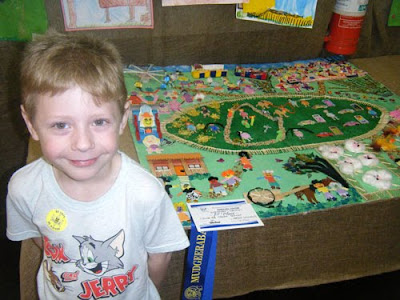 We had to have a go on the dodgem cars (their fave ride). It was Ayden's first time driving on his own which he thought was very cool! So funny to watch the serious look on his face the whole time. He didn't crack a smile til it was almost over! LOL 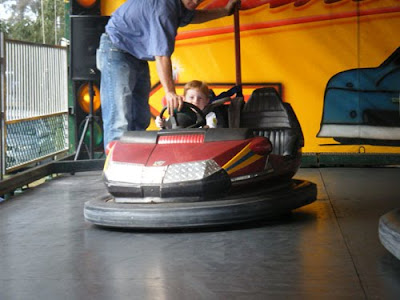 Paul took Riley at the same time so they could bump into each other... 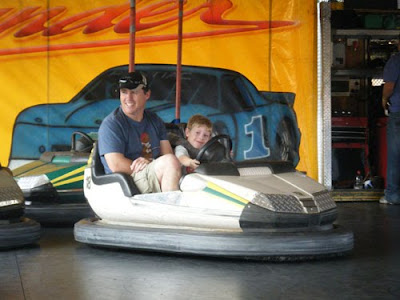 Then while we were waiting for the boys to finish their ride Madi decided she wanted a go too! She was SO excited standing there holding her ticket... 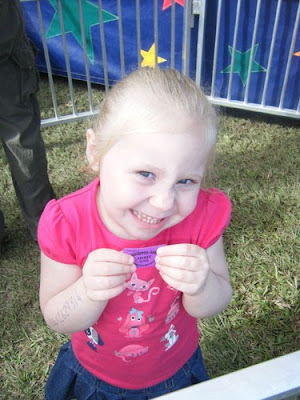 And you couldn't wipe the grin off her face the whole ride! 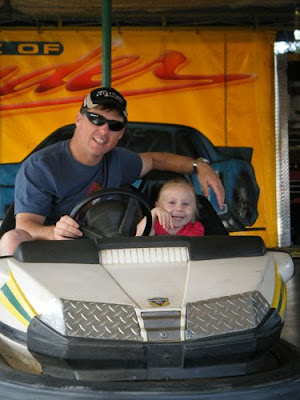 It was a great day...a fun way to start the school holidays!

Sorry...nothing scrappy to share this time. I've been working on some DT projects but can't share just yet.

I'll try not to leave it so long between posts this time...but I have a feeling it's going to be a busy two weeks with Paul and the boys at home! It'll be so nice to just enjoy some family time together. :)

Thanks for dropping by!

Email ThisBlogThis!Share to TwitterShare to FacebookShare to Pinterest
Labels: crochet