What a jam-packed week it's been! Australia Day, organising back to school things, getting ready for Kindy... it's been one thing after the other! You may need to grab a cuppa because this might be a big one...

We spent the weekend at home covering school books. (Sooo glad that job is over!! YUK) Well ok it didn't take all weekend but it still seemed to take ages! Ayden finally mastered tying his shoe laces just in time for school. So proud of him!!! It only took him a couple of days and there he was doing it all by himself. (Last year in Prep he had velcro school shoes.) 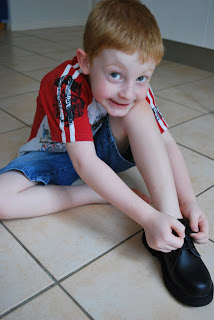 Monday was Australia Day. We had planned on taking the kids out somewhere, but with the weather being so unpredictable we decided to head on up to Mum & Dad's place instead. The kids practically spent all day in the pool and loved every second. Riley and Ayden are getting so confident in the water lately... can't swim properly just yet but they're not far off! It was the first time Madi was brave enough to get in as well. Usually she just wanders around the edge too nervous to get wet but we found it hard to get her out! Even Nanna got in to cool off... Madi thought that was great! 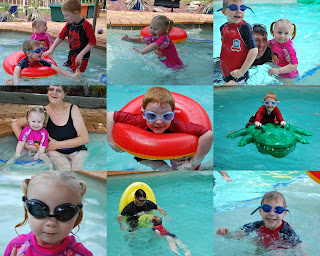 Tuesday was back to school for Ayden. As soon as he got into the classroom and found his friends he was straight back into the swing of it all. He had a great day, likes his new teacher, and came home with lots of drawings and things to show us. So glad he enjoys going to school! 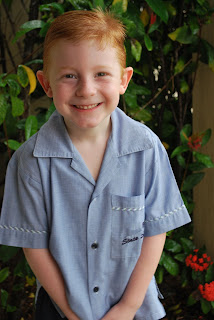 Wednesday Mel and Liv came for a visit. Always love it when they pop around! Madi and Liv played while Mel and I caught up. Then that afternoon I got a lovely surprise when a parcel arrived in my letterbox...the RAK that I won on Lea's blog last week from her 100th blog post! Just look at these gorgeous goodies she sent me... love it all!!!!! (Thanks again Lea! Just can't bring myself to use any of it yet... still looking at it! Hee hee hee) 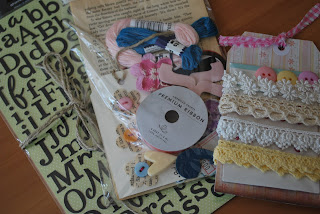 That brings us to today - Thursday. It was a HUGE day for Riley today... and I have to say I'm so very proud of this little man! It was his very first day of Kindy!! 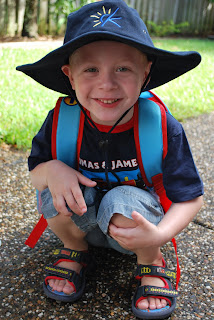 He was SO excited and such a good boy when I dropped him off this morning. He remembered where everything was from our orientation day last year. He put his bag in his little cubby hole, put his drink and lunch where it's supposed to go and headed straight for the train set on the carpet to play. I was waiting for the tears when I said I was going but he was totally fine... gave me a kiss and cuddle and said 'Bye Mum! Come and pick me up later!' as he headed to the puzzle table. What a relief!!! He's never been left anywhere on his own without his brother or sister and I'm amazed at how it all went. When I picked him up this afternoon he got all excited to see me but then his smile changed to dropping his lip... on the verge of tears. His teacher said he did have a good day but he's not used to the whole routine yet... he'll get there. He did proudly show me the painting he'd done though and couldn't wait to show Ayden and Daddy! He says he's going to do some more tomorrow. (Something tells me that tomorrow's drop-off won't be quite as easy... we'll see...)

I did squeeze in a layout during the week as well. I've been trying to scrap some of my older photos. I've had this one sitting around with this paper for AGES! It's not a paper I'd normally reach for but I thought it suited the pic. (It's actually quite glittery too but doesn't show up in the scan).... So I used it along with some other older alphas and things. Feels good to use up old supplies! Madi was only a week old in this photo...it's one of my faves. 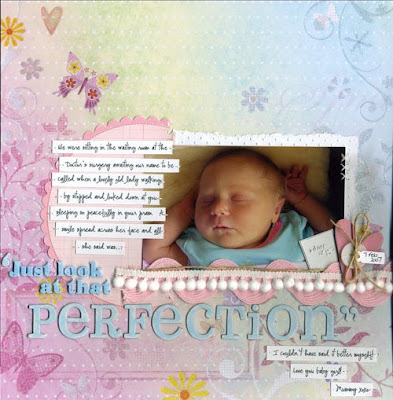 The journalling reads... 'We were sitting in the waiting room at the Doctor's surgery awaiting our name to be called when a lovely old lady walking by stopped and looked down at you sleeping so peacefully in your pram. A smile spread across her face and all she said was "Just look at that perfection!" I couldn't have said it better myself. Love you baby girl! Mummy xoxo'

Looking at that photo I can't believe Madi's about to turn 2 years old on Saturday! Wow she's grown up so much...

Anyway... I think that's about enough for tonight! Wish me luck for our Kindy drop-off tomorrow...

By the way... I'm thinking of all of you girls down there in that 40+ degree heat (especially you Lea with less than 3 wks to go until bubby arrives)!!! Hope you're all managing to stay cool... and that the temp goes down soon. It must be unbearable!!!! Take care and keep those air conditioners cranking!