It's about time I updated!

Ok...so I've been neglecting my blog lately...you know how it is though! It's been a busy, fun few weeks with Christmas and New Year celebrations! Time for a bit of an update though I think...

I'll get my scrapping out of the way first... haven't done much in the lead up to Christmas with everything else going on, but last week I sat down and scrapped this page. I've had this photo and papers sitting around for AGES to do... and it's the first thing I've scrapped just for myself in a LONG time. 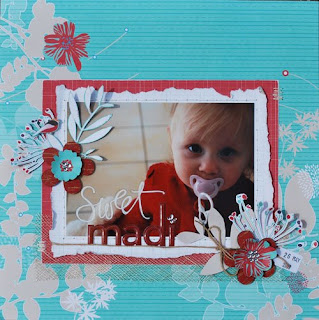 Here's a couple of close-up pics... 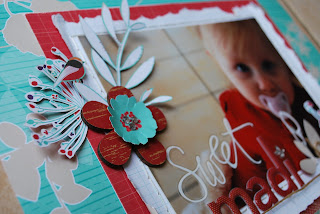 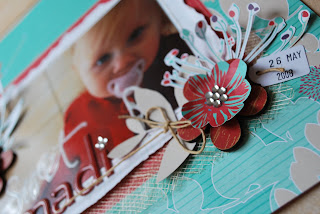 So that was my last layout for 2008! I've been busy scrapping my first 2009 layout last night but can't share just yet...
I guess I can also share a few pics of some of the handmade gifts I gave some friends for Christmas (now that they have them!). I made these journal covers (Janelle's gorgeous pattern) with matching fabric baskets (you can find that pattern here)... 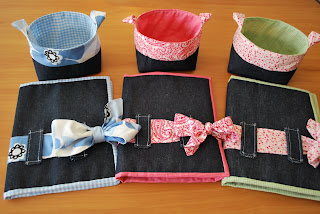 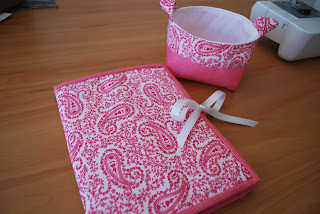 I also made some of these little denim needle holders. They were pretty easy. I just made up my own pattern and cut out some little felt designs and handstitched them on. (These were the first ones I made...) 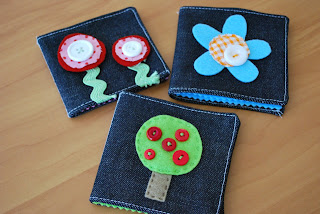 Now about our Christmas. I'll keep it fairly brief since it's already been and gone... We spent Christmas Eve at my Mum & Dad's place. (Paul had to work nightshift but he arrived on Christmas morning at about 9.30 or so - bummer that he missed the present opening though...) The kids couldn't believe their eyes and had so much fun unwrapping all their presents. Ayden's fave was his new scooter and Playstation 2, Riley's was definately the Playstation 2 & Lego Batman game, and Madi's faves were her Rescue Pet Puppy, her dancing Dora and her new bike!!! They got so much stuff (must've been REALLY good kids last year! LOL)... it was lucky that we had two cars to take everything back home in!

Paul was pretty stoked about his iPhone docking station. He also got a couple of new caps, a set-top box and a few other things.

I felt totally spoiled when I opened my beautiful Pandora bracelet from my Mum & Dad (LOVE it!) and Paul and the kids gave me a new Cuttlebug!!! (YIPPEE!!!) Also got some embossing folders to get me started and a few other great things.... (Now I'm all inspired to make some cards... hee hee hee)

We ate way too much food for lunch and then headed over to one of my brother's houses for a nice relaxed afternoon. It was so nice to have all the family there together!
Boxing day we spent and Mum & Dad's place. The kids had a ball in the pool with Paul, Dad watched the Boxing day cricket on tv (sometimes through his eyelids... hee hee hee) and we all just cruised around and relaxed. It was great!
Paul had to work nightshift again on New Year's Eve (bummer again) but my parents came to stay at our place for the night and we saw the new year in together watching the fireworks on tv while eating too much chocolate and junk food. (Which reminds me... I really need to start exercising more! LOL)
The kids have really enjoyed the school holidays so far. Lots of Playstation, trips to the skate park with their scooters, visits to Nanna & Grandpa's place and they saw "Bolt" at the movies just the other day which they loved. I can't believe there's only a few weeks left until school starts again! I think we'll be heading to the shops tomorrow for some school shoes....
So I think that's about it for now. Hope 2009 has been nice to you so far! Better go round up my rowdy kids in the loungeroom...
Catch ya soon!
Sheree xx
Posted by Sheree at 3:10 PM