Today was a pretty big day for us here... a day we've been dreading for a while. Our little man (Riley) had to go to hospital to have some dental work done. We've been so very worried about him having to go under general anaesthetic... he's never had to have it before, and being only 4 years old we had no idea how he'd handle it...but I'm happy to say he did an amazing job and we're so incredibly proud of him! (Sorry if I ramble on but I really want to record the story of today...) 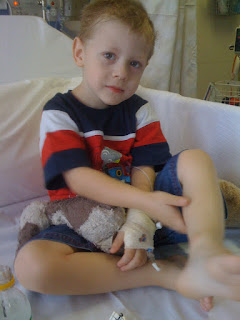 We had taken Riley to the dentist at the end of last year as he had a hole in his back tooth that was bothering him. (Yep... we felt like terrible parents...we did brush his teeth!) The dentist discovered that all the enamel hadn't developed properly on all of his back teeth so he was extremely susceptible to decay. (Apparently any illnesses he may have had when his teeth were developing in the gums when he was a baby could have caused this... and he did have chickenpox when he was 6 months old... it's all we can put it down to.) So anyway as a result the only way to save his tooth was to put him into hospital to have a root canal done and a metal crown put onto his tooth along with applying protection to the other affected teeth.
Well today was the day. Paul and Riley left home very early this morning and headed into Brisbane to the hospital. He had to fast, so couldn't have breakfast. They got there at 6.30am as requested and was supposed to go in at around 8am. There were a few delays and he actually didn't get seen until around 11.30am or so. Needless to say the poor little thing was starving by this stage!!! But Paul said he was soooo good. (Kept asking if he could have lunch though...) When it finally came time to go in he was great! He sat up on the bed and listened to the doctor, watched some "Happy Feet" that was playing on the tv, and when it came time for the gas he handled it really well. The doctor told him it smelled like lollies (LOL) and asked them if he like lollies... well of course he said he did... "and I also like chocolate!" and that was the last thing he said before he fell asleep. He came through the whole procedure with flying colours and no complications... and thankfully they were able to save his tooth. When he came to in recovery he didn't cry... not even a bit! The nurse came and got Paul and all he wanted was to play with his new Star Wars lego that we bought him for being such a brave boy. He had something to eat... was halfway through eating it and suddenly fell back to sleep! He slept for a few hours after that...and when he woke up again and got the all clear it was time to come home. 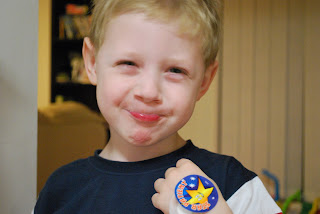 He ran through the door tonight proudly displaying his "Star Patient" sticker and showing me his new 'robot tooth'! He had a look for the first time in the mirror and thought his new metal robot tooth looks pretty cool. I am truly amazed at how wonderful he was today...we're so unbelievably proud of him! And we're so relieved that now it's done... and he won't be in any more pain with that tooth!
Well... all the kids are snuggled up in bed sound asleep so I'm off to enjoy a nice cuppa with Paul...maybe with some chocolate...and watch some tv. Have a great evening!
Sheree xx
Posted by Sheree at 9:22 PM