And The Winner Is...

This morning my very handsome little assistant drew the RAK winner out of our very high tech competition barrel.... ok so it was a little cane basket... and the winner is..... 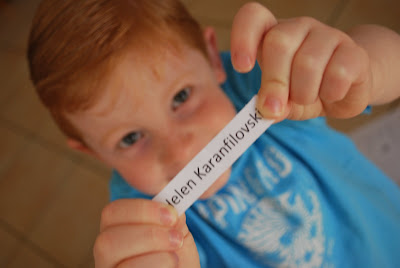 YAY HELEN!!!!! I just can't wait to see what you create with your bundle of goodies!!! Hope you like them! Just e-mail me with your details and I'll pop them in the post to you asap! Thank you so much to everyone who took the time to leave a comment. I really do appreciate it... and it was lovely to see some new 'faces' too! (Oh and by the way... don't worry... every strip of paper in the basket was the same size no matter how long or short your name is :))
So with that out of the way I guess it's time for an update!
Madi had her 18 mth needle on Monday. I was really dreading it! She had been really good with all her previous needles but since she's so much older now I wasn't sure how she would handle it this time. To my surprise there wasn't even a murmer!!! No flinching, no crying... I was amazed!!!! (And so was the nurse mind you!) What a brave little sweetie she was! She hasn't shown any side effects either so it's been fantastic. As a reward for being so brave we gave her a new Big Sister Dora doll and she just adores it.
I ran another Scrap-a-Sketch class on Wednesday at Sunbird Scrapbooking and here are my two examples:
The first one I did on 'Tubbs' and Ayden. 'Tubbs' is the class cat at school and each child gets a turn at bringing him home for an adventure weekend. 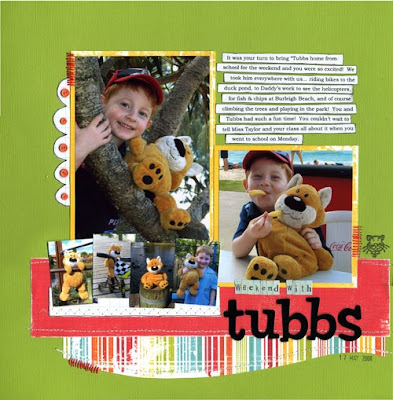 The second one is all about Madi's love for Dora. She's got so much Dora stuff now and she loves it all! I love these super cute pics... (I've used one of Yvette's journalling spots on this and the next layout. Check out her etsy store if you'd like some...I love them!) 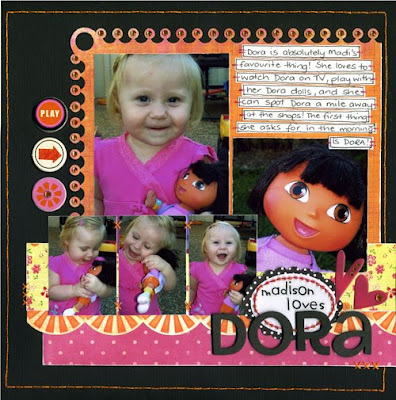 Here's another layout that I haven't been able to share until now... 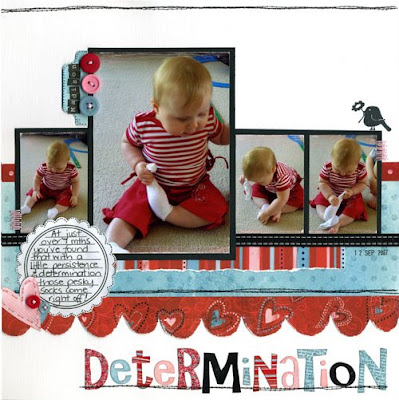 And finally I've got this layout in the latest issue of Scrapbook Creations. The colours look a little different in the magazine.... 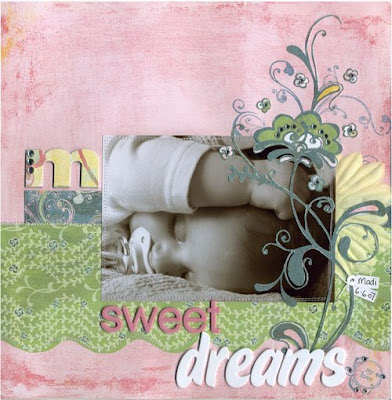 I had all the girls here on Friday night for some scrapping... although once again we did more chatting, laughing and eating more than scrapping! LOL! But it was a lot of fun. Unfortunately Val & Sandra had to leave a little early but Mel and Leanne stayed on. Of course we had SYTYCD on tv in the background... couldn't miss that! Then the opening ceremony of the Olympics came on...spectacular!!!
We've been watching the Olympics over the weekend and it's been great so far. I've been amazed at how much interest Riley has taken with it all! He's been watching it all last night before bed and then most of today as well. We've told him to look for the competitors in green and gold and he's worked out who the Aussies are now and it's the cutest thing to listen to him barracking for them. "GO MOZZIES!!!" LOL!!!!!! I keep telling him it's "Aussies" but he just can't help but call them mozzies!! It's the funniest thing!! I think he's definitely going to be our little sports nut...
Well I think that's all from me today. Hope you're all having a wonderful weekend! I'm off to watch Madi & Riley on the trampoline. It looks like Madi's hair has already gone wild with static off the tramp mat!! LOL!!! Maybe I'll grab the camera too....
Sheree xx
Posted by Sheree at 1:59 PM